For a Monkee everyday is a Holy day, no one moment ranks above the next to be eternally free is to be removed from judgment of time, all time is special in it’s own way.

Liberation is it’s own celebration!

The howl of the monkee will signify his lust for sex, violence, or both!

The vengeance of the Armada is the dreaded Flying Monkees From Hell! The airborne legion of the Kingdom. Fierce warriors whom personal safety is forgone, for the good of our cause.

Every good mother will carry her child upon her back until the day when he can attack!

The Armada stands for physical strength, fighting ability, and the capacity to persevere. Armada fighters display superhuman powers to accomplish acts of service and the ability to increase one’s attitude of love in preforming selfless service.

Armada fighters must be full of grace. Even if it appears to be an awkward grace (filled with stumbles and near misses), EVENTUALLY ALL Monkees will fall. It is to their strength, they do not stay down. The trees are our home we will not be denied them for very long. The skies belong to the birds, the ground to other beast. To the Monkees, the Kingdom lies in the trees.

Rabid Wolverines, can’t compare to a Ragin’ Rhino, and that horned Hippo don’t touch the power of a Mad Baboon-Captain of the world! 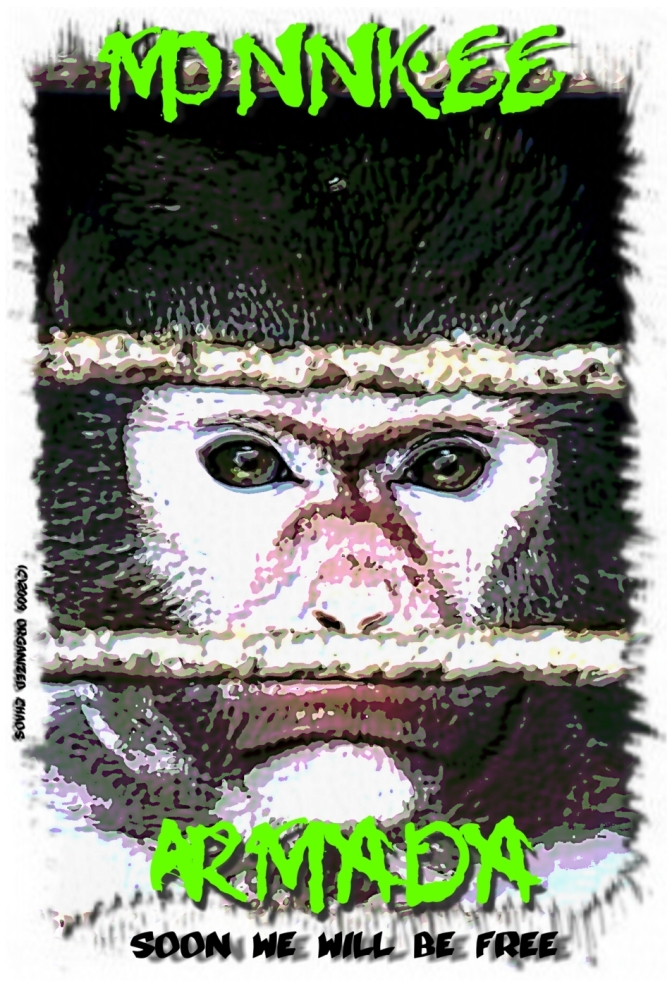 The foundation of the Armada as we know it. Beginning with the earliest tales of Monkee Power

The fables, legends and beliefs of humans in the power of the paw, and the tail.

-the religious writings of Hinduism reached their peak of historical development with two great epic sagas, the Mahabharata and the Ramayana, both of which have been described as the Collective Unconscious of India sending their own idiosyncratic yet universal message to humankind.۞۝۞۩۞

I am that golden Monkee who stole the keys to heaven I was sent to find the secret parchments and bring them back home. But, I kept a few for myself. I fought along side Rama against the armies of Sri Lanka. I have made love with the earth and gave birth to the whole human race. I have stole from the gods and laughed as they fell from grace. I see the end of time and my bastards blast into space. I came from the golden egg to bring Chaos and hilarity to the universe.

Thee 3 Precepts: as laid out by the Codas Armadas our law in word

Go and be free

For you and for me

No need to be afraid now

the world is in you and me

So spring and jump

from each little tree

for you and for me

۞۝۞۩۞Micheal Jordan, Eastern Wisdom: The philosophies and rituals of the East

Feel free to leave a comment or a trackback to your site-thanks for visiting.

8 thoughts on “About the Armada”