Last night I pulled a surprise shift at the Heavy Metal club I used to work at 6 years ago. I got some much needed cash that allowed me to sit at Starbucks for a few hours today and use their blessed Wi-Fi. It was a slow uneventful shift, I was filling in for someone at the last minute so I ended up working the door outside checking IDs and handed out wrist bands. After the rather ho-hum show, I witnessed a little lovers quarrel between a leggy blonde in a tight dress and her skinny-jeaned boyfriend who’s band had played just before the main act. Though their problems were none of my business no one in ear shot could help but over hear;“You broke my heart in New Mexico, now you stand their pointing and laughing at me with your friends.” It seemed funny to us at the time, mainly because of how he looked in his ridiculously skinny jeans and wet curly rocker hair. I kept thinking about it the rest of the evening though. Had his statement mirrored my own feelings as of late? Hell yeah! I understood exactly where this guy was coming from. I too had argued intensely with my love in New Mexico. We had made it through but Things were touch and go until we reached the Grand Canyon in Arizona. 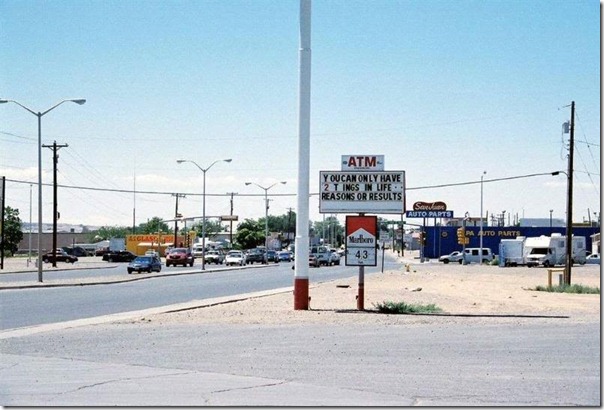 More importantly I wish I could have ran up to the guy and told him to walk away. That it wasn’t worth it no matter how pretty she was. No matter how exquisitely that tight blue dress hugged her ass. I wanted to tell him that there were other girls out there who would love a drummer for a cock rock band in tiny pants. I didn’t though, not because I couldn’t or shouldn’t, but because I had yet to tell myself those exact same words, or the relative equivalent there-of. Alright that’s it! I’ve had enough! It is high time I stop wallowing in self-pity and pull myself up by my bootstraps and start taking charge of my life again. I no longer have the luxury of laying on the couch crying woe is me. I never really had the luxury, but I took it any way. America just had it’s birthday, and in just over three months I will have my 35th. There is no more time feel sorry for myself or ponder where things went wrong in my life. I decided to care about someone more than I cared about myself, good or bad, right or wrong, I made the choice now I have to live with it. Caring about someone isn’t the worst mistake you can make in your life. Relationships end, there will be others and they will end as well, you have to take this shit in stride and move on.

Sure there will be relapses in this thinking and occasionally I will burst into tears for seemingly no reason at all, but this is it I have to start making moves for the rest of my life. Though it feels at times that it is over, I assure you it is not, I will go on and on like a mindless drunk robot monkey. It’s time to start acting like one. The job situation looks to have some light at the tunnel. Once I nail down a gig and start occupying my time with other things and other people I can better climb out of this hole. I think I’m finally in the acceptance stage of my grief. I feel like Steve Martin at the end of the Jerk when he splits with his wife and waddles out of the house picking up odd random bits of things claiming it’s all he needs now. Yet most of my junk is still clear across the country and the odds of me seeing any of it soon are slim. Which is fine because I have no where to put them now anyway.

I am grateful for all I have been able to do and see over the last five years. I have traveled a long way from Mocksville, North Carolina, and done things I never thought I would be able to do. Reflecting on the past has put some perspective on the situation. It wasn’t a total wash. It would have been great if things had worked out, but there is only so much genuflecting I can do. I can say that I got to live in three of America’s biggest and well known cities. I also got to live in Oakland for awhile which should earn me a purple heart. I met some people I will hopefully call friend for the rest of my life. I accumulated enough stories to write another book, and hopefully get this one published. When we argued in New Mexico, it was because coming through Colorado had destroyed the brakes on our van. Whose fault it was and who shared the blame was a point of contention, then we ha a hard time finding a motel. Our original plan to camp at a Indian reservation was nixed when we realized it wasn’t free or as safe as we thought. We finally settled in a cheap motel and picked up a six pack. Cracks in the fission had began forming the moment we left St. Louis, by New Mexico they had deepened to a chasm. In many ways they never repaired themselves as good as the brakes on the van did.

The Monkee Armada have left our veil of humanity behind and taken to the trees. We are not one of you but you may be one of us. We stand as the last line of defense for the Earth against the soul-crushing tyranny of mankind. Death to all Hue-Mans! Long live Monkees! View all posts by Monkee Armada